Domaine du Vieux Télégraphe has been run by the Brunier family for five generations, and since 1891. The estate’s vineyards are situated on the famous “Plateau de la Crau”, the stony terrace where there is nothing but “galets roulés”, or rounded stones, as far as the eye can see. This special terroir imparts a highly distinctive minerality to the wines. Vieux Télégraphe is made from predominantly three grape varieties, 65% Grenache, 15% Syrah, 15% Mourvèdre plus 5% Cinsault and Clairette. In their state-of-the-art gravity flow winery, the grapes are partially destemmed and are fermented in both stainless steel and wood cuves.

The blending is done at the end of June after which the wine is matured in large foudres for 20 months. The red wines are bottled unfined and unfiltered and display tremendous concentration and intense flavours of dark cherry and “garrigue”. The best vintages will age for 20 years and more.

The white Châteauneuf is made from 40% Clairette, 25% Grenache Blanc, 25% Roussanne and 10% Bourboulenc of which 1/3 is fermented in 225L barrels, 1/3 in 600L barrels and 1/3 in stainless steel. After three to four years, it develops into a rich, succulent, nutty treat reminiscent of white Hermitage.

Télégramme comes from the younger vines of Vieux Télégraphe, less than 30 years old, and older parcels not located on the plateaux of La Crau or Piedlong. The blend is 80% Grenache, 10% Syrah, 6% Mourvèdre and 4% Cinsault. Ageing is in vats for 10 months followed by foudres for a further 7 months before bottling. The result is a delicious fruit driven Châteauneuf-du-Pape which drinks very well in its youth.

Piedlong – The Brunier brothers have produced this special Châteauneuf du Pape from two distinct parcels since the 2011 vintage. It is a blend of 90% Grenache (70-year-old vines) and 10% Mourvèdre (50-year-old vines). The Grenache is situated on the stony Piedlong plateau (full of galets roulés) in the heart of the Châteauneuf appellation, north of the village and the highest point in the production area (128m). The Mourvèdre comes from the sandy Pignan lieu-dit, east of Piedlong. The wine is aged for 20 months in French oak foudres and there is no filtration or fining. This is a classic Brunier wine with the mineral expression dominating the character although there is plenty of richness and depth too.

Domaine La Roquète was purchased by the Brunier brothers in 1986 and they immediately replanted the small (2 hectares) Clos la Roquète vineyard to white varieties (34% Grenache Blanc, 33% Roussanne, 33% Clairette). It is beautifully situated alongside the Piedlong plateau and the sandy top soils deliver great freshness and elegance to this very fine white Châteauneuf-du-Pape. Ageing is on the lees in barriques and demi-muids. Just 1100 cases are made each year.

Pigeoulet comes from two separate parcels, 10 hectares on the lower southwest facing slopes of Mont Ventoux and 3 hectares on the east bank of the Rhône, 15km north of Avignon. The blend is 80% Grenache, 10% Syrah and 10% Carignan and Cinsault and aging is in foudres for 12 months. The Mégaphone, Ventoux AOC comes from a number of plots on the southern slopes of the Dentelles de Montmirail. The blend is 80% Grenache and 20% Syrah and the vineyards are 25 years old. Aging is in foudres for 10 months.

The Marc de Vieux Télégraphe is made from old vine Grenache and Mourvèdre and is distilled in a traditional Burgundy style three stage copper pot still, then aged for a minimum of 10 years. It is bottled unfiltered. 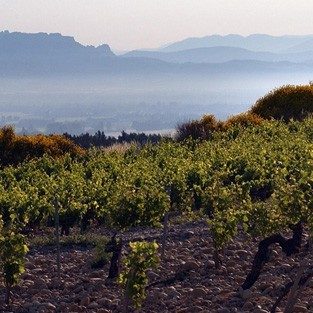 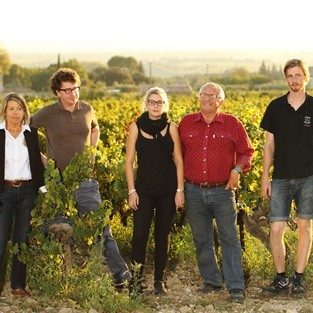