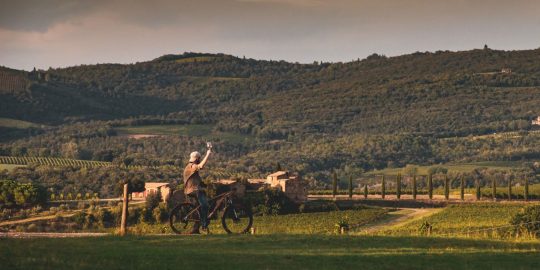 Montalcino has been blessed with a back-to-back pair of stupendous vintages, firstly 2015 and now 2016. We Brunello lovers are truly fortunate to be able to oscillate back and forth between these two poles of perfection! Tasting from barrel in the cellars, we immediately realised that 2016 was going to be one of the finest vintages in living memory. And, as with the back-to-back vintages, we at Thorman Hunt are blessed with having two exceptional Brunello producers to offer you. Now it’s your chance to get hold of some of Argiano’s and Tommaso Cortonesi’s extraordinarily great wines. I would suggest that there is room in your cellar for both houses! This is a vintage that will last for many, many years.

An exceptional year, which began with above average temperatures and not too much rain. But, equally, a vintage that can be considered difficult, given the severe weather conditions from March to June (the latter month being especially difficult): we had 400 mm of rain between April and September! But we never lost heart and we never gave up, even when conditions made it seem too hard to carry on. One thunderstorm lasted for several days, with over 45mm of rain in that short time, and made it impossible for us to get into the vineyards.

Germination took place much earlier than the average (20-26 March), and we have never previously needed to give the first treatments as early as 7th April, which we did in 2016. The precocity of the year’s cycle led us to expect a much earlier harvest than usual, but fortunately normal climatic conditions returned at the end of June. We then enjoyed a typical summer, but with temperatures never rising above 34° C.

A quite unique factor of the vintage was the veraison which, as in 2015, took place about the 15th July but which completed the colouring of the bunches in the very short time, compared to an average year, of about 2 weeks. By the beginning of August all the clusters were 100% coloured. This rapid change caused us to think there would be a precocious maturation, but we were wrong. It took 70 days (against the usual 50-60 days) to achieve full maturation.

From mid-August we were blessed with very positive weather conditions, and a strong variation in temperature between the day and the night. These conditions brought the maturation process back into full swing, not only giving important aromas to the grapes, but also creating a certain regularity and homogeneity of the process itself. The normal temporal parameters of maturation were thereby re-established.

In the second half of August, and also in September, we were faced by two or three long “cycles” of north wind which further helped the concentration of the grapes. Our interventions on the vineyard vegetation and soils ensured that the vines remained in perfect health, both during the very rainy period and also the hot /windy period (August). We achieved technological maturity with a “healthy” product in the true sense of the word: the bunches were beautiful, with thick skins, and full and concentrated in colour. We were able to make all our decisions with regard to timing in complete calm, since we had no worries at all about the grapes deteriorating on the vines. We were thus able to pick at the ideal maturation moment.

All the grapes brought into the cellar this year were in excellent condition: not a sign of mould or any other similar problems. We’d like to highlight and emphasise the great success we had this year in our sustainable non chemical fight against harmful insects such as moths (sexual confusion is our tool here), and a highly destructive species of ladybird, which lays its eggs in between the grapes (we have introduced a “killer” wasp into the vineyard to destroy the eggs).

So successful are these stratagems that we were able to completely avoid the use of insecticides!